Few towns can claim the distinction of having birds named for them – but Knysna has three: the Knysna Warbler, the Knysna Turaco, and the Knysna Woodpecker.

Situated as it is between the Outeniqua Mountains and the Indian Ocean, the magnificent Garden Route – so called because its beauty compares to that of the ‘Garden of Eden’ – is a diverse region of South Africa that has much to offer resident and visiting birders alike.

South Africa’s favourite tourist area, Knysna, is perfectly situated at the centre of the Garden Route coast to fit into any birding itinerary – whether driving the coastal roads from Cape Town to Port Elizabeth, or heading inland via the magnificent Outeniqua Pass to the Klein Karoo, and from there via the Swartberg Pass to the Great Karoo, with all its arid-area birding specials.

Habitats in this region range from pelagic to Afro-montane forest, from Karoo to alpine, from estuarine lakes to fynbos – which makes birding in the Garden Route both varied and rewarding.

Here are three of my favourite birding routes in the greater Knysna area:

Start at the Deep Walls (Diepwalle) Forest Station, the centre of the Knysna forests – the largest continuous indigenous forests in South Africa.

From here, drive along the Kom-se-Pad forest road, stopping frequently to look and listen for bird parties, which are often indicated by the cackling of green wood hoopoes.

Here you might see olive woodpeckers, while the cleared patches of bracken and fynbos you’ll encounter are good for Victorin’s warbler. But look up while going through these cleared areas, because you’ll often see forest buzzards soaring above.

At Gouna head back towards Knysna. The large areas of mature fynbos that lie along this road are perfect for Cape sugarbird, orange-breasted sunbird, Victorin’s warbler, and Cape grassbird.

The area between the suburbs of Sedgefield (in Knysna) and Wilderness (in the George area) offers spectacular birding in very different habitats: fynbos, forest, grassland, and estuarine lakes.

It’s best to begin exploring this route early in the day. Start at the Big Tree Forest Walk at Woodville, near Hoekwil. This is a gentle circular walk that allows for easy access to tricky forest birds. As with all forest birding, knowledge of calls helps immeasurably. Look out for species such as scaly-throated honeyguide, Knysna turaco, narina trogon, white-starred robin, lemon dove, Knysna warbler, and buff-spotted flufftail.

From Woodville, continue on the Seven Passes Road towards Knysna, and turn right onto the Rondevlei Road. This area is reliable for black-winged lapwing and Denham’s bustard, especially in the area of the ‘Baboons Rest’ junction.

Continue down the pass to Rondevlei, and turn left at the junction to Sedgefield. You will shortly cross a channel that links to two sections of the Wilderness Lakes Ramsar site and IBA (important bird area). An excellent photographic spot, this channel is good for little bittern, malachite kingfisher, purple heron, and Hottentot teal.

Continue along this road and take the left fork to the SANParks offices and the Rondevlei hide. The area around the car park is good for olive bush shrike and Knysna woodpecker, while the hide is very good for kingfishers, greater flamingo, purple swamphen, African fish eagle, African rail, and general waterbirds.

Take the George Rex Drive turnoff from the N2 through Knysna, and drive towards the iconic Knysna Heads. The pans of the Woodbourne Marsh are situated about 3 km along the road on the Eastern (left-hand) side; they’re great for ducks, waders, and Peregrine falcons. 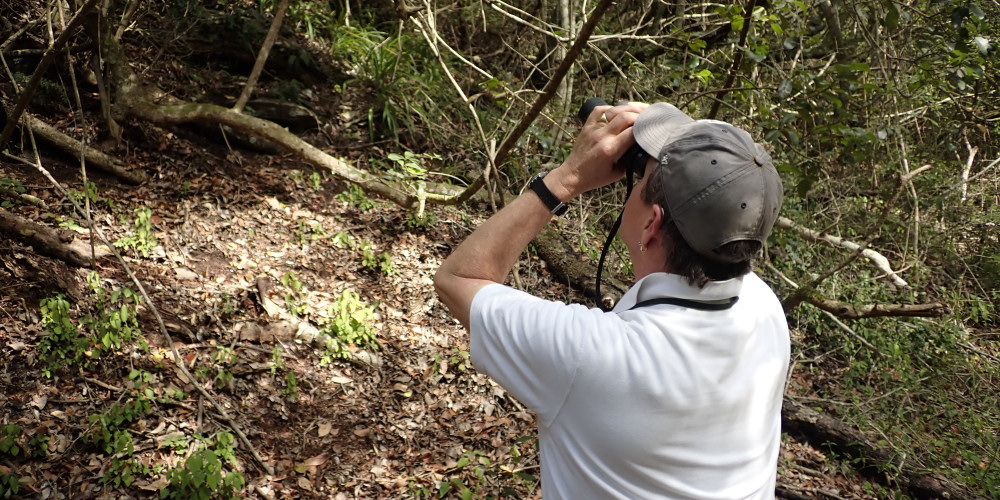 Continue from here to the magnificent sandstone cliffs of the Knysna Heads. The area at the base of the Eastern Head is fantastic for Peregrine falcon, Cape cormorant, white-breasted cormorants, African black oystercatcher and half-collared kingfisher; follow the signs over the mountain to Coney Glen, where the small patch of forest situated between the parking area and the beach is a great spot for the elusive Knysna warbler.

A number of superb local guides can assist in planning a day’s birding, and in ensuring you get the most from a day out.