For anyone who wants to explore the Knysna Forests, one writer looms large: the Afrikaans novelist, Dalene Matthee (13 October 1938 – 20 February 2005).

In total, Ms. Matthee published twelve novels and one children’s book – many of which were translated into other languages.

Her four ‘forest novels’ are remarkable both for their descriptions of the lives of the people who lived and worked in the Knysna forests in an earlier age, and for addressing themes of conservation and exploitation that were always amongst her greatest concerns.

Perhaps her two best-known works are the novels ‘Circles in a Forest’ and ‘Fiela’s Child.’

In Circles in a Forest (first published in Afrikaans as ‘Kringe in ‘n bos’ by Tafelberg Publishers, Cape Town, 1984), woodcutter Saul Barnard – an outcast from his community – and the canny old forest elephant, Old Foot (Oupoot), who’s being chased mercilessly by hunters, battle to survive against the mindless destruction of their wilderness home.

In Fiela’s Child (‘Fiela se kind,’ Tafelberg, Cape Town, 1985), a child appears mysteriously at Fiela Komoetie’s home in the Langkloof, on the far side of the Outeniqua Mountains and many weeks’ hike from the Knysna Forests. Fiela names him Benjamin and raises him as her own – but when the authorities discover him, they assume he must be Lukas, the missing son of a woodcutter family from the Knysna Forests. They remove him from Fiela’s care, and send him to live with the van Rooyens – but the man he becomes will eventually and inevitably ask: “Who am I?”

To read one of Ms. Matthee’s remarkable stories is to steep yourself in the beauty, mystery, and tragedy of the forests that make Knysna unique.

Her books continue to receive critical and public acclaim. In a 1999 survey to determine the Top 100 Books, 350 libraries placed ‘Fiela se kind’ second, and ‘Kringe in a bos’ third after JRR Tolkein’s Lord of the Rings at number one. And in 2006, ‘Fiela’ and ‘Kringe’ were two of only three Afrikaans-language books included in a list of ‘The 101 Books to Read Before You Die’ compiled by the South African retail chain, Exclusive Books.

Ms. Matthee twice (in 1986 and in 2004) received the Southern African Institute of Forestry’s Award in recognition of her specialist knowledge of the Knysna Forests; for the technically correct nature of her writing; and for the awareness she created both of the need to conserve the forests, and of the difficult lives the forest people led in the 19th and early 20th Century.

Dalene Matthee’s memorial is situated at Krisjan-se-Nek in the Garden Route National Park – one of her favourite spots in the forests. 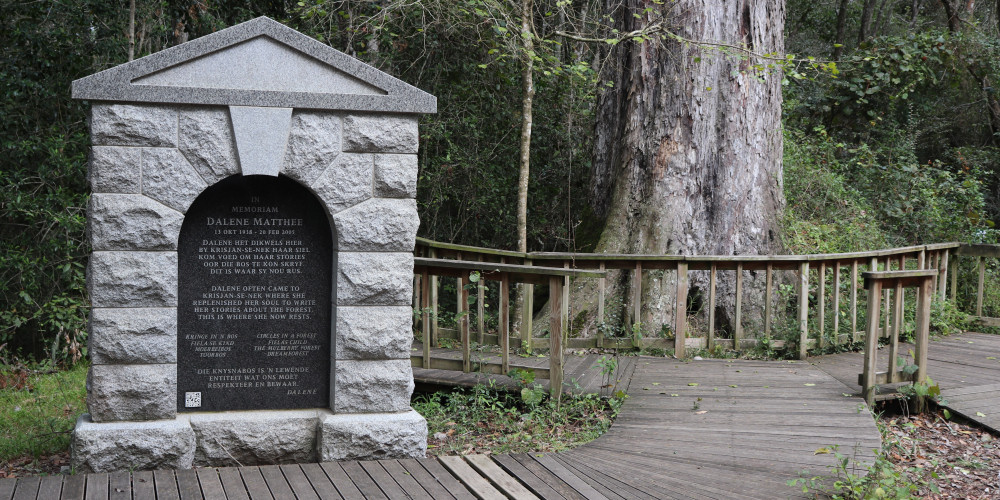 The memorial stands next to a giant yellowwood of about 900 years of age – now known as the Dalene Matthee Big Tree – and at the start of the 8km ‘Circles in a Forest Trail,’ where you’ll find info boards that describe the trees mentioned in Ms. Matthee’s Forest Novels.

The memorial is one of the stops along the Garden Route National Park’s ‘Rooted in Time’ self-drive tour, that includes some of the most important historical sites in the Knysna Forests.

Also on the route, the San Ambroso Chapel Museum tells the story of the silk spinners of Gouna, whom Ms. Matthee celebrated in her novel, Moerbeibos. 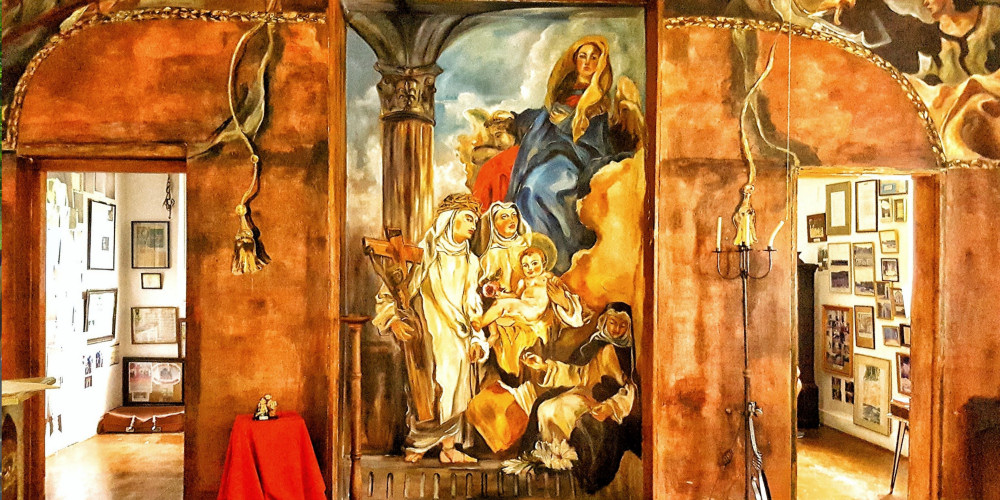