For a tiny town, Knysna makes quite a splash when it comes to boatbuilding – and it’s arguably never been more successful at producing water craft than it is today.

Knysna’s shipbuilding tradition didn’t exactly have an auspicious start, though. Its first shipyard – established by the British navy in 1820 to exploit the abundant timber from the Knysna forests – lasted just five years, and burned down (or was it burned down?) twice, taking its never-completed ship with it.

The ones that made it to the water

Nevertheless, a few private individuals did complete a handful of sailing vessels for the coastal trade during the 19th Century: the farmer and timber merchant George Rex launched his 140-ton, 2-masted brig ‘Knysna’ (built of indigenous stinkwood) in 1831; the tavern owner, Skipper Horn, launched the schooner, ‘Rover,’ in 1855; and the pilot and harbour master, John Benn, launched his schooner, the ‘Annie Benn,’ in 1867.

After that, though, there seems to have been something of a lull in commercial boat building that lasted until the start of World War II, when the Knysna-based Thesen Industries (Pty.) Ltd (Thesen’s Boatyard) won a contract to produce 640 vessels for the British Navy – including ten, 33 metre (110 foot), wooden Fairmile class submarine hunters.

Shortly after the war, the cabinet maker and all-round gentleman, Hentie van Rooyen, established his yard, Hentie Craft, where he built sailing dinghies and Hentie Cats for fishing and waterskiing. (Hentie was also the founder, designer, and builder of Hentie’s Botel, a wooden hotel over the water that stood on the very site where the naval boatyard had burned down in 1820. And like the boatyard, Hentie’s Botel was burned down, too – in 1972. Hentie and Rita van Rooyen, though, had sold the business eight years previously.) 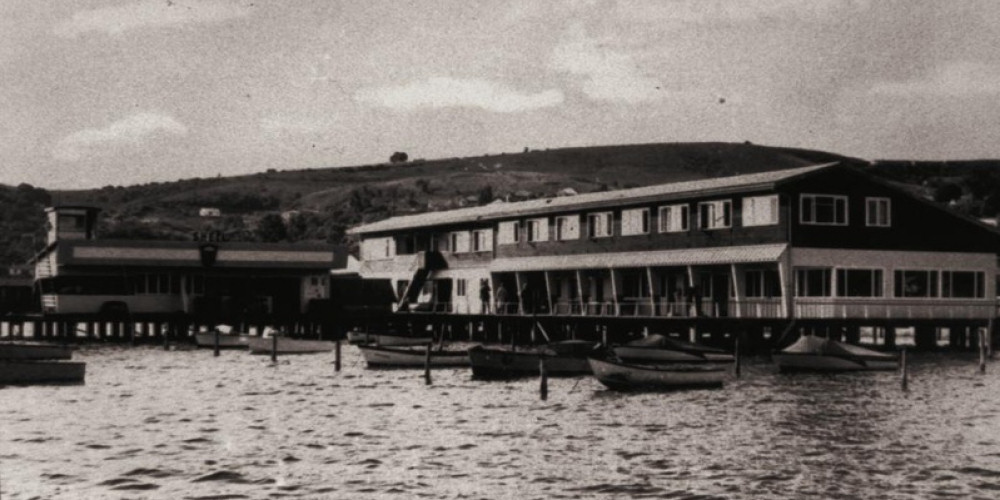 Although Hentie continued building boats almost until the time he passed away in 2002, and the Thesen yard had been closed in the mid-’80s, a few others (which are also sadly no longer in operation) continued producing boats in the later part of the 20th Century: the boutique yard, Haiku Craft, for example, which crafted exquisite wooden kayaks and wooden canoes, and James Edwards’ Lucky Bean Marine, which built Knysna’s famous restaurant cruiser, the mv John Benn. (Lucky Bean had been founded by the internationally recognised yacht designer, Geoff Schionning – some of whose designs are still coming out of Knysna.)

Boatbuilding really took off in Knysna in the second decade of the 21st Century, though, and thanks to a combination of factors: the spirit and energy of a raft of new young boatbuilders who chose to set up shop here; a willing workforce; the favourable rand-dollar exchange rate; and rapid developments in fibreglass lamination technology and other construction techniques that local boatbuilders eagerly adopted.

And, of course, for buyers of larger yachts and catamarans – who like to visit the yards building their boats to see progress on their orders for themselves – Knysna is a great destination, with a wide selection of accommodation, spas, golf courses, beaches, and other attractions to enjoy while you’re here.

Today’s Knysna-based yards produce catamarans, monohulls, sailing yachts, speedboats, aluminium pontoon boats, and more – and, supported by a small but active number of retail sales and repair shops, as well as by specialist manufacturers of boat parts and accessories, they’re producing them in greater quantities than ever before.

Because who wouldn’t want a boat from Knysna?