Beautiful Knysna remains a top holiday destination in the Western Cape for cyclists as it is one of the best places to ride a bicycle. Cyclists will tell you that cycling has many advantages – it is a way to explore beautiful surroundings, to lose yourself, to challenge yourself, to meet new people and to bond with friends.

One of the top 10 things to do in the Greater Knysna area is cycling. Road cycling around the Knysna lagoon, to Buffalo Bay, exploring Sedgefield, up to Barrington and Karatara offers spectacular scenery! The good rural roads are usually quiet and there is a nice wide verge in the N2.

Back in the late 80s and early 90s Knysna was at the forefront of the mountain biking wave, which is still building 35 years later. Most of the area to the north and east surrounding Knysna is pine plantation, or pristine indigenous forest, with gravel roads and forest tracks offering literally hundreds of kilometres of riding, and options! Look out though, much of the land is generally part of a working forest, and falling trees are a real danger when felling and loading are in progress. If you see the “Falling trees” sign, re-route your ride immediately! The bonus is that this is pretty much the safest area for cycling in South Africa – crime against cyclists is almost non-existent and cycling on your own is considered safe.

Knysna is fantastic because you can hop on your bike at home and ride to the trails. The town is in a bowl, so there is usually a bit of climbing to be done, but that gives you the opportunity to catch up with friends while warming up, or to try to get a PB! 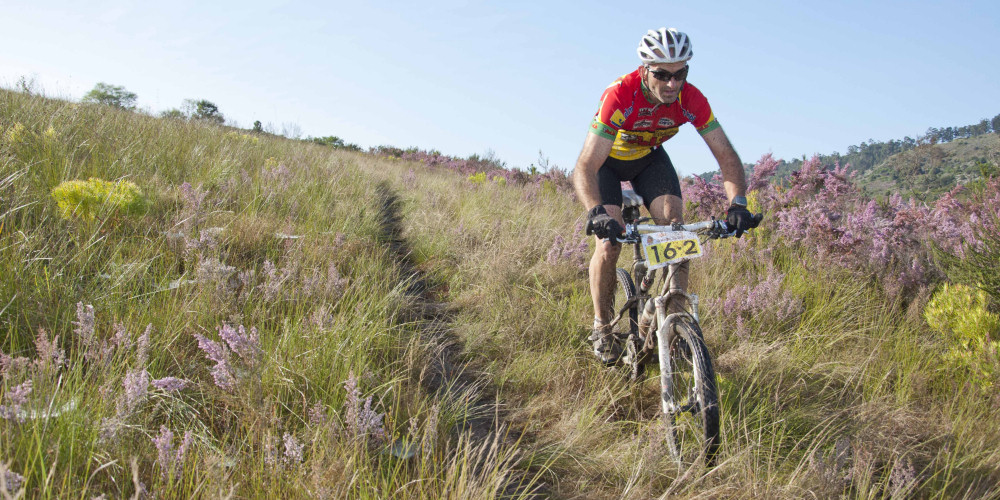 The Knysna MTB races such as the Knysna Cycle Tour and stage races such as the Bull, which have been very popular, offer out of towners only a tiny glimpse as to what cycling in Knysna has to offer. There really is something for everyone.

SanParks offers a number of marked trails in their indigenous forest sections – on the Harkerville, Homtini, Petrus se brand and Farleigh trails you have a chance of spotting the last remaining Knysna elephant! These trails are mostly on old forestry paths dating from the 1800s and there are even saw pits nearby where the woodcutters would cut up the trees into logs by hand.

Top Tip: Famous tourist attractions in the Knysna forest such as the Big Tree, Forest Museum at DiepWalle Forest Station and the gold mine at Homtini are accessible by bike – all must visits.

The Garden Route Trail Park in Barrington has become a top MTB destination in South Africa with many kilometres of marked purpose built trail, complete with berms, jumps and all that good stuff. As an amateur trail builder, the Trail Park is like an art gallery! It is on the Dohrmel farm and the way Rob Dohrmel has used the space and terrain to create flow is truly astounding! This alone is worth packing the bikes on the car and heading to the Garden Route. There is a pump track, jump line and Café on site. More information here … 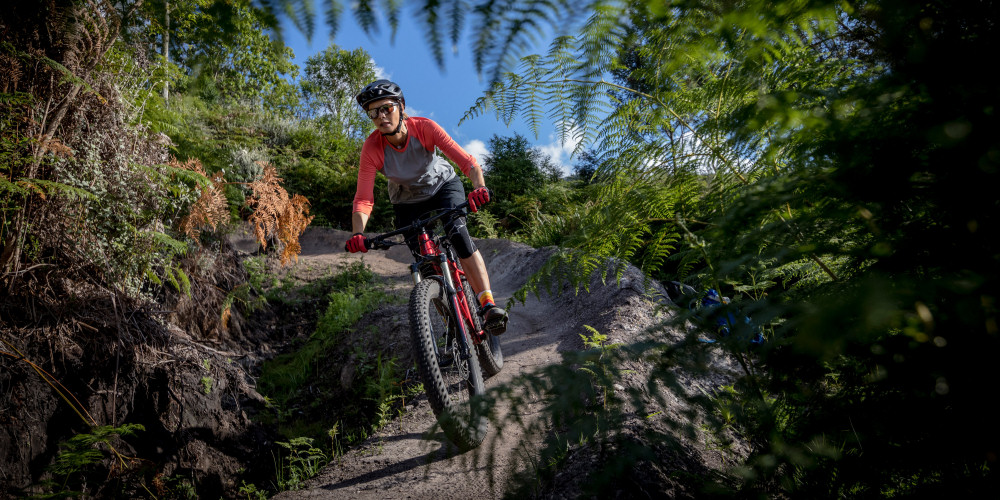 The Concordia contours trails at the top of the Simola hill has many kilometres of single track built by local cyclists. There are no routes as such, but the trails are all signposted and discovering a new way to string them together is part of the charm. This is a great place to hone skills and fitness as the single track can be technically challenging as speed increases. There can also be quite a bit of climbing depending on which trails you ride.

Top Tip: The contour roads in the plantation are fairly flat, non-challenging and ideal for beginners, families or to add a bit of distance to your ride. This is where we go for a quick ride in the forest after work.

Locals tend to mix it up, doing rides which incorporate bits of the marked trails, often doing unmarked routes through the forest from one set of trails to the next through MTO Pine plantations near Brackenhill, Noetzie and Concordia. Knysna cyclists are generally a friendly bunch, and if you hang out at the top of Simola (outside the Simola Golf Estate), The Farm (near Simola), or at the Waterfront Drive Caltex garage/Seattle, you’ll soon meet someone who’ll show you around, steer you in the right direction, or put you on a WhatsApp group! The local Knysna cycle shops will also gladly help out.

For those who don’t want to #ridewithalocal, The Trailforks app and website offers a lot of insight to where the locals ride, and websites such as CXTrails.co.za. offer downloadable GPX files. STRAVA now also offers a great new route generating feature.

Day, seasonal and yearly permits from SANParks are available from the SANParks office at Thesens Jetty. A MTO Trail Pass covers access into most of the Pine plantations, and the Concordia Contours Trails near Simola from the nearest LBS (local bike shop) in town. Garden Route Trail Park offers day or year permits through the MySOS App.

Time to hop on those bikes and go for a cycle!

*This article was written by local cycle enthusiast Stuart Lightley. 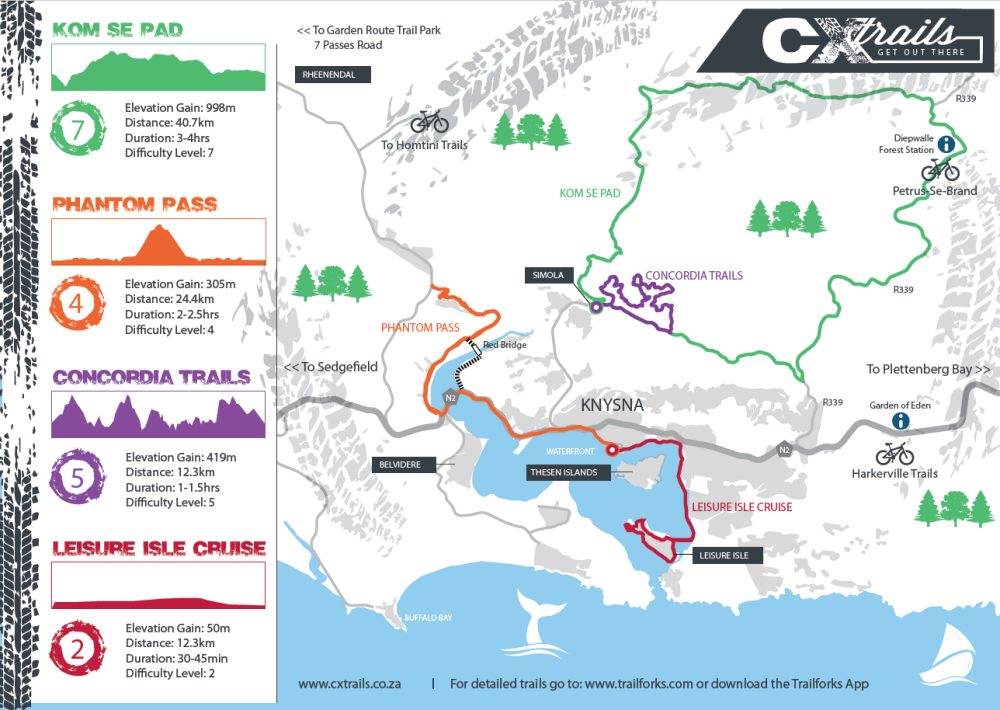 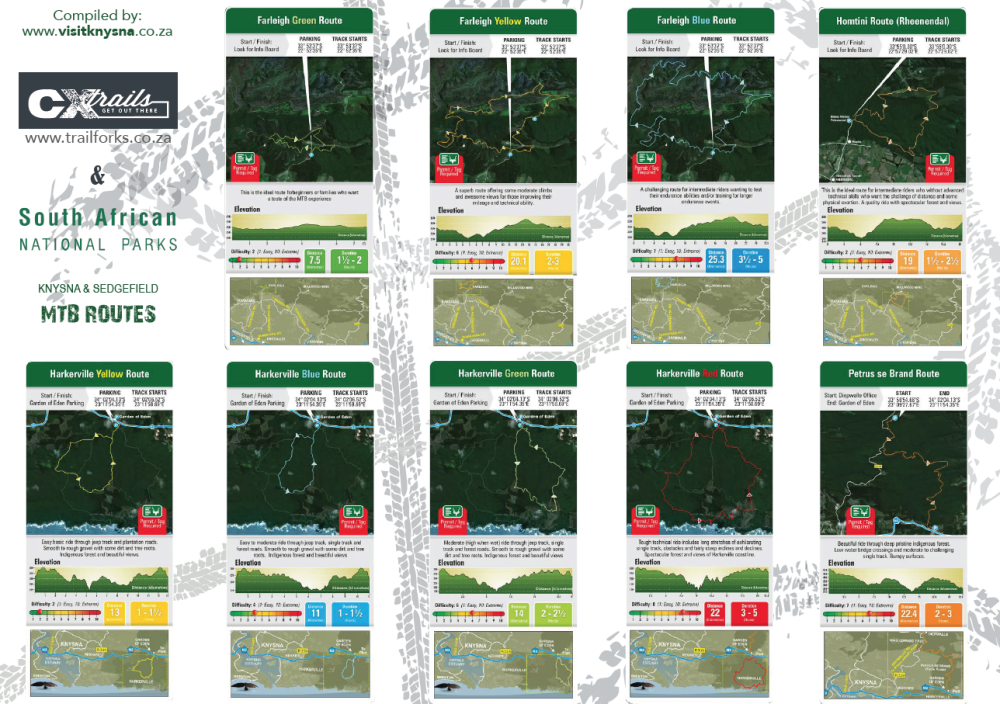