“It’s not about the beach,” John Collins chuckles at his own joke as he kneels tightening his laces. I ask him if he rates this as one of the ten best things to do in Knysna. “I think it’s one of the ten best things to do in the world,” he says unhesitatingly straitening up and gazing out across the bay as if contemplating his good fortune. Then, unable to resist the allure any longer he jogs off into one of the most pristine coastal backdrops in the world. It might not be about the beach, I think, resisting the tug on my own soul as his effortless stride carries him into the wispy distance, but this beach sure has a lot to do with it.

The enchanted 5km arc of beach is the only direct link between two of Knysna’s most beautiful villages, Brenton on Sea and Buffalo Bay and, ask any local, traversing it is one of the best things to do in the Western Cape. Most people walk it. For John, a trail runner, the choice isn’t between walking or running it. His choice is between running here or running on a road somewhere and for him, that isn’t really a choice. Luckily for John he lives in Knysna, the heartbeat of trail running country. Within a few kilometres of his home he, and a frenzied community of trail runners, have access to an embarrassing riches of world class trail running. Mountains, forest, coastal rocks – the Garden Route has it all. Today however, its beach running that is on John’s menu.

There is only one hard and fast rule to running on the beach; catch the low tide when the beach is hard and fast. A high tide will force you into the soft sand up against the dunes and although that will do nothing to diminish the beauty, you will be setting you self-up for a much tougher run. The highest and lowest tides, the spring tides, come around roughly every two weeks or so and are associated with the full moon or no moon.

If the moon and sun do align for you, and you find yourself in Buffalo bay during a spring low tide with a pair of running shoes, then mother nature has indeed smiled on you . There is no need to restrict yourself to the beach between Buffalo Bay and Brenton. Head west and you can fit in 42km of uninterrupted beach running all the way to Sedgefield and Wilderness. Yes, if you’re fast enough you can run a blissful beach marathon but you will be racing the tide. 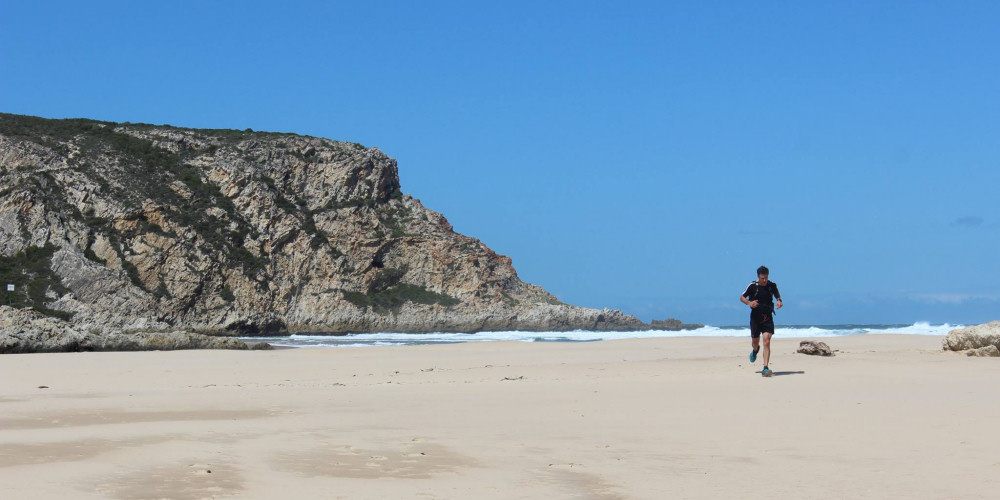 If the tide is in, you’re not out of luck. On the contrary. Being based on the Brenton side enables you link up the clifftop trail to highlight any combination of public pathways and suburban roads that can be linked to make up a memorable run by any measure. On the Buffalo Bay side a beloved little trail cuts through the dunes behind the village starting just off the wild side carpark and reaching the beach just beyond the last houses. This short trail rounds off any longer beach run but also and closes a delightful 5km loop around the village. 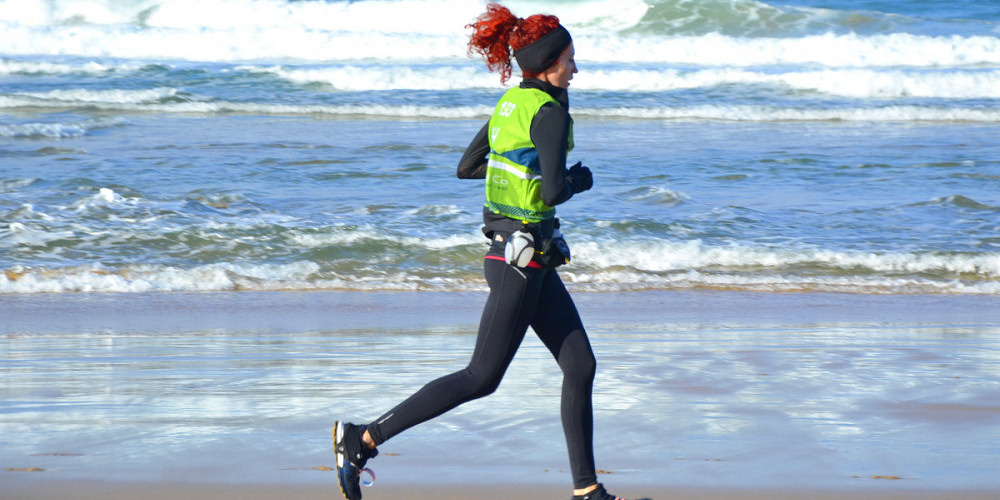 Then of course there is Goukamma Nature Reserve. If there is one underrated destination in South Africa then it’s this little gem of conserved coastal dunes. The park entrance is tucked behind the corner just after the road to Buffalo Bay crests the last rise. If you are not distracted by the breathtaking view out across the lagoon mouth – and no one would blame you if you are – you might just see the turn off. Nestled up against the dunes, CapeNature offers a variety of elegant accommodation options which overlook the lagoon. Safe parking, ablutions and braai facilities make the spacious riverside picnic site below the perfect base for any trail running day. But it’s the more than 30 km of hiking trail that this park conceals that really gets trail runners’ pulses racing. Local trail gurus include a traverse of Goukamma among a hallowed list of Garden Route “classics.” The eastern trail heads can only be reached by Pont making the experience as much an adventure, as a run. The combination of trails and beach running is only really limited by ones imagination. Permits are obtainable at the gate.