Packed with an astonishing abundance of life, the Knysna Estuary is the most biodiverse estuary in South Africa. Of all the myriad creatures sustained here, the rare Knysna seahorse (Hippocampus capensis) is by far its most prominent resident.

What makes the iconic creature so special is that out of the more than 50 different seahorse species which occur worldwide, this is the only known true estuarine species.

Belonging to the genus Hippocampus, which stems from the Ancient Greek word ‘hippos’ (meaning horse) and ‘kampos’ (meaning sea monster), seahorses have been around for at least 40 million years with only slight evolutionary adaptations. They have a distinctive armoured body with an extended abdomen and a head that resembles that of a horse, hence their name. What many people do not realise is that seahorses are fish, because they breathe through gills and have a swim bladder. One particularly unique characteristic of the species is that it is the males who give birth.

Knysna seahorses can be found in only three Garden Route estuaries, namely the Knysna Estuary, the estuarine portion of the Swartvlei system in Sedgefield, and further west in the Keurbooms River estuary in Plettenberg Bay. Owing to this limited geographical range and its small overall population size, it is the first seahorse to be classified as endangered by the International Union for the Conservation of Nature (IUCN).

They are small, somewhat muted in colour and extremely well camouflaged, which makes viewing them in their natural habitat rather challenging. They are found in fairly dense concentrations throughout the Thesen Island Marina, so if you head over to the jetty at a low tide, and peer into the shallow depths, you can sometimes spot them clinging onto the renomattress structures which make up the artificial walls of the marina.

Occasionally, when the Swartvlei River mouth is artificially breached, you see them stranded on seagrass beds at the water’s edge and rescue teams are called in to try and save them. Unfortunately, many seahorses and pipefish perish as a direct result of the breaching of this system. 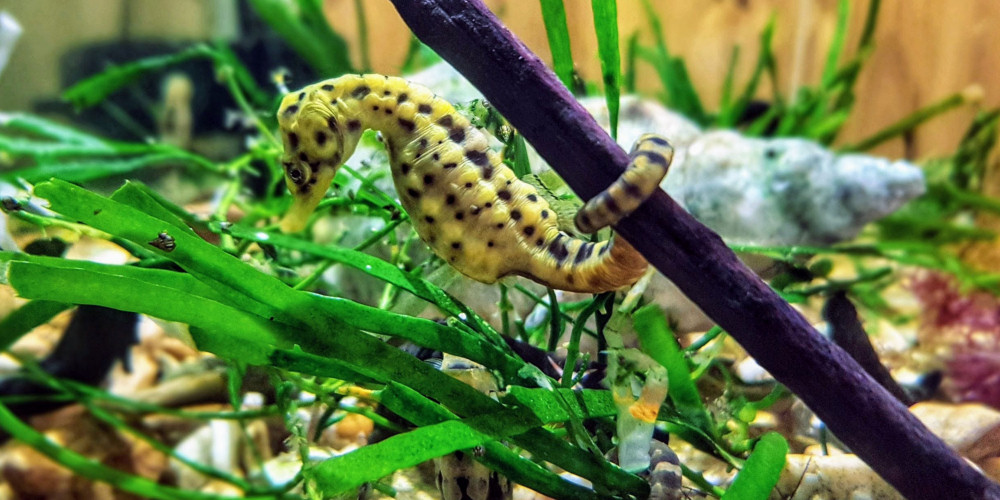 Get up close to a Knysna seahorse

If you want to study these incredible creatures closely, we suggest you visit the SANParks offices on Thesen Island, where they have a display tank full of Knysna seahorses and other small Knysna Estuaryresidents, including the pipefish, a close family relative.

The Knysna Basin Project, the local NPO dedicated to the study of the Knysna Estuary, has done several in-depth studies on this species. The study of seahorses is important for scientists and conservationists because they are known to be an ‘indicator species’, which is an organism which serves as a measure of the environmental conditions that exist in a given locale. Seahorses are extremely sensitive to adverse changes to their natural environment. A thriving Knysna seahorse population could, therefore, be indicative of a healthy estuarine system, and vice versa. Not only do we need to protect this rare and endangered endemic species but also all the other fauna that is sustained by Knysna’s rich estuarine system.