Please Note: Please note that due to the COVID-19 pandemic all Featherbed’s services are temporarily suspended. Please check that they have re-opened before you plan your outing!
Look out across the Knysna Lagoon and through the Knysna Heads: do you see that beautiful, natural, undeveloped piece of land on the right-hand (western) side of the river mouth? That’s the privately owned Featherbed Nature Reserve.

Featherbed was established as a tourist attraction in the mid-80s by the legendary South African teacher and television personality, William Smith (‘a recipient of the Order of the Baobab (silver) in recognition of his services to teaching and the “demystification of mathematics and science.” ~ Wikipedia).

Part of the land belonged previously to William’s equally famous father, Prof.J.L.B. Smith, the author, chemist, and ichthyologist who famously identified and described the coelacanth – a fish that was thought to have died out with the dinosaurs.

The story of the discovery of the coelacanth in 1938 – and of the subsequent, 14-year search for a second specimen – is intimately intertwined with the Reserve (which was one of the Professor’s favourite fishing spots). It therefore remains a favourite told by the guides on Featherbed’s Eco-Tours. 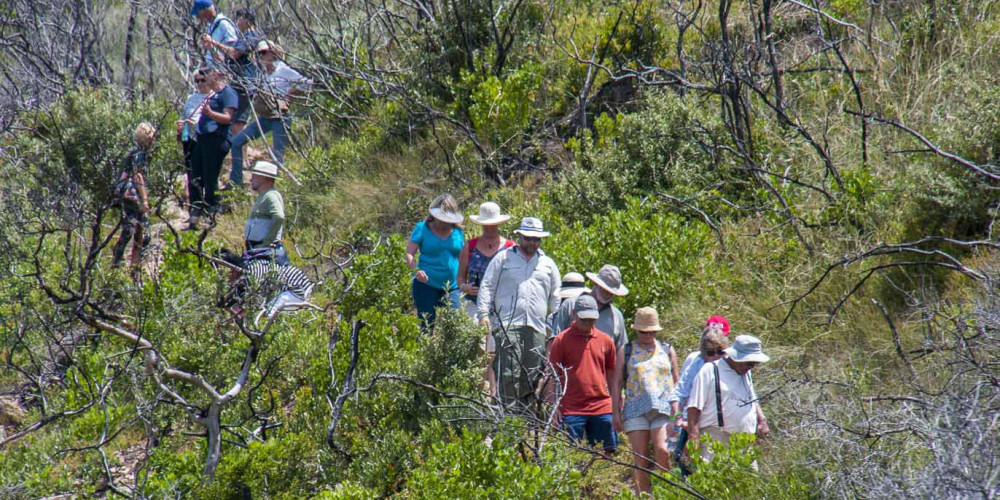 These four-hour excursions include ferry rides across the Knysna Estuary that begin and end at the company’s terminal on the town-side shore; a guided drive up the mountain to enjoy spectacular, sweeping views of the region – from the Indian Ocean in the south to the Outeniqua Mountains in the north; an optional, 2.2 km downhill coastal walk; and (on selected tours) a traditional South African braai (BBQ) and buffet.

Features to explore on the walk include the rare and natural Knysna Sands Fynbos that grows naturally here; a small but significant stand of Albany Thicket (milkwood forest); and a series of ancient sandstone caves – an important Middle Stone Age archaeological site. (Featherbed has always been a magnet for people: with the recent discovery of a stone tool workshop on the property, we now know that humans were living here as far back as the Earlier Stone Age – more than 300,000 years ago.)

Besides the views and its history, the great attraction at Featherbed Nature Reserve is the natural vegetation.

The Knysna Sands Fynbos, of which only about 1,600 hectare survive, is considered a critically endangered subset of the fynbos or Cape macchia – a characteristic vegetation type that’s found only in South Africa, and only in the coastal region that stretches from Vanrhynsdorp on the West Coast, via Cape Town, to Makhanda (Grahamstown) in the Eastern Cape. 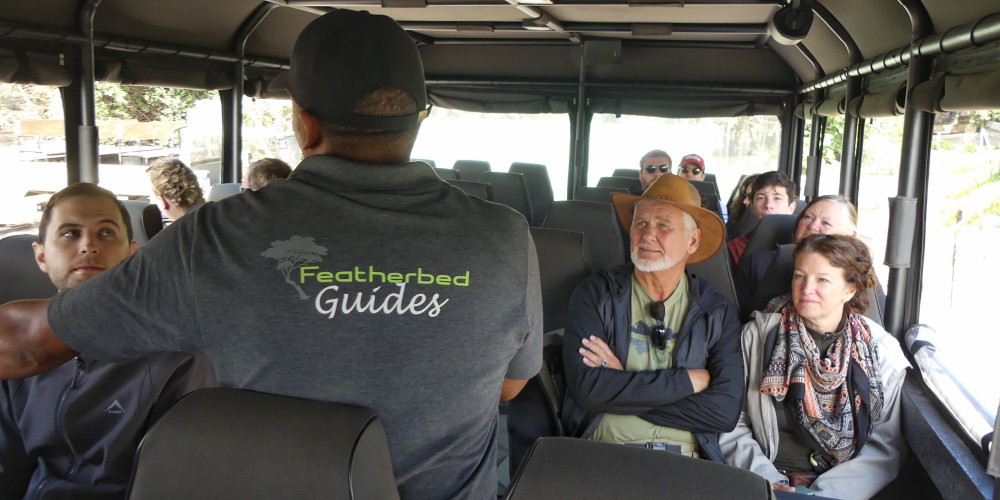 The team at Featherbed has created a catalogue of life on the reserve on the scientific platform, iNaturalist.org, where, in the period since the devastating Knysna Fires of 2017, they’ve recorded more than 300 species of plants, birds, insects and other life-forms.

Discrete signs along the walk provide information about traditional uses for and medicinal values of around 80 species of plants found on the reserve – while eagle-eyed walkers might spot southern right whales or humpback whales out to sea, or pods of dolphins playing in the breakers at the feet of the cliffs below the pathway.

The 2017 Knysna Fires burned almost 20,000 hectares of fynbos, forest, farmland, and residential areas in the Garden Route – and destroyed more than 95% of the vegetation at Featherbed.

With the land exposed to potential erosion – and vulnerable to invasion by invasive alien species of plants like the rooikrans (Acacia cyclops) – the owners* of the reserve appointed a rehabilitation horticulturist and a team of workers who spent eighteen months protecting the biodiversity of the vegetation to ensure its sustainability.

And it’s this biodiversity that makes Featherbed such a unique place to visit.

Please note that due to the COVID-19 pandemic all Featherbed’s services are temporarily suspended. Please check that they have re-opened before you plan your outing!