There is no better way to describe the magic that will soon brighten up Buffalo Bay than with the lingo of the surfers who come to ride the waves here. The #knysnaartproject “rips,” and the (surf)board-walk planned for the beachfront will be nothing short of “kiff”. “Totally stoked” is how those involved in the project describe the plans that are busy unfolding here.

Just a short drive from Knysna, Buffalo Bay is part of the Goukamma Marine Reserve and has long been a favourite weekend hangout for locals and sun-seeking holidaymakers in season. With its pristine pilot Blue Flag beach and spectacular, sprawling coastline scenery, Buffs, as it is affectionately known, is also reputed to have some of the best waves along the Garden Route and surfers can be seen speckling the sea all year round.

Now the #KnysnaArtProject will give pleasure-seekers yet another great reason to turn off the N2 and spend some time here. An ambitious and exciting collaboration between Visit Knysna (the greater Knysna area’s Destination Marketing Organisation), the Knysna Municipality and the Knysna Art Society, #knysnaartproject has been in the planning stages for over a year. The end results will be well worth the wait though and will no doubt stake Buffalo Bay as an iconic surfing destination.

“For Buffs, the concept for the #knysnaartproject was inspired by the surfers who come here – a series of six artworks on surfboards, staged as a permanent exhibition of sorts near the main swimming beach, the sprawling bay providing a picture-perfect backdrop for that been-there-done-that selfie,” explains Colleen Durant of Visit Knysna.

“First we needed the surfboards,” says Helena Gerber, Knysna Art Society chair, “so we put a call out on social media for second-hand ones. We ended up with twelve boards being donated – twice what we’d been looking for”. Each surfboard was refurbished and primed before being handed over to an artist.

“But at the same time, word was getting out about the project and more and more artists started approaching us with requests to participate. We found ourselves in a position where we didn’t have enough surfboards to go around but we also didn’t want to say “no” to anyone. So we’ve made a plan and negotiated a bulk purchase from a supplier.” This means that the Buffs Boardwalk will now showcase the contributions of more than thirty local artists. And others can be added in future. 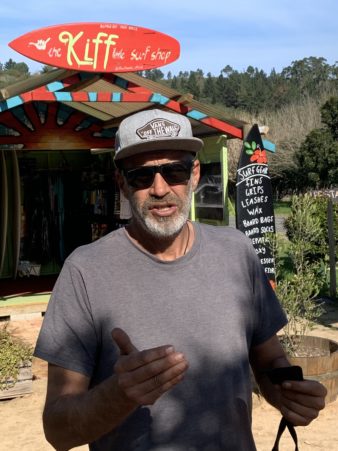 At the forefront of the Buffalo Bay component of the #knysnaartproject is the passionate force of Waldermar van Wyk, “Wildy” to his friends. Wildy has been a Knysna local since 1995. “I came to do a music gig with PJ Powers and just never left,” is how he explains it.

Since then, Wildy has shared his love of music with hundreds of students from far afield through his music academy, The Garden Route Music Collective. His mother Barbara van Wyk is a household name in the world of teaching music while both his sisters are music professors. Wildy himself has been offered overseas scholarships in the fields of music and arts and is the founder of The Knysna Jazz Quartet.

Wildy is the resident champion for the Buffalo Bay “Boardwalk” and creative director for the project. “Wildy is not only a brilliant musician but he is also an award-winning surfer and a highly accomplished artist. He lives, works and surfs in Buffs – we couldn’t have found a better face and voice for the project,“ explains Helena.

Wildy is the consummate surf-rat, never missing the gap to head for that perfect wave. Feathers in his cap are provincial colours for surfing and Springbok judging colours. “Surfing is at the core of everything I do,” he says. According to Wildy, Buff’s Bay has waves that can compete with any in the world because of the nature of the surf. “Here we get good consistent waves, a short window for excellent waves, but conditions which are perfect for beginners and experienced surfers, for all levels of proficiency,” says Wildy who has been teaching people to surf since he was a child.

Along with his own board-work for the Boardwalk, Wildy is working on a large sign for the beachfront. A glimpse at his sketches reveals that it is less a sign and more of an artwork in its own right – a beautifully illustrated map of the surf along with some pointers on surf etiquette and guidelines on safety.

However, his most notable contribution to the project will be a mural on the railway bridge that you pass through just as you turn off the N2 towards Buffalo Bay. Wildy is about to start painting a giant wave over the arch.

Waves have been a primary source of inspiration in his paintings. He describes his work as drawing and painting at the same time since he has a novel way of dripping paint which he says is a way of combining both talents. During the Covid-19 lockdown in 2020 Wildy created thirty paintings in anticipation of an exhibition later this year. In the meantime, he has a few on display at his new living and working premises alongside the RiverDeck farm stall (opposite the popular RiverDeck restaurant), where he is bringing all his passions together in one place.

Wildy has set up a surf shop here offering top-of-the-range gear – the first of its kind in Knysna. Premium quality but reasonably priced, the quirky #kiffsurfboards is already attracting surfers from up and down the Garden Route. With its painted surfboard signs and bright wave mural, the shop perfectly complements the spirit and style of the #knysnaartproject. “I want local surfers to be excited, to buy-in and take ownership of our beautiful beach and waves, our Buffalo Bay area,” says Wildy.

In the not-too-distant future, this will also be where Wildy paints, teaches music and performs. A laid-back jazz bar is on the cards and he’s moving his surfboard repair workshop and custom-board manufacturing business here. Wildy has made more than sixty custom-made surfboards to date and has recently started offering customised artworks on them too.

Chairman of the Buffalo Bay Ratepayers’ Association, Jacques Malan, summed up the response to the project in the area. “We love it, we absolutely love it,” he said praising organisers of the #knysnaartproject, Visit Knysna and the Knysna Art Society.

The Buffalo Bay beachfront is one of six iconic sites in Greater Knysna identified for public art placements in phase one of the project. A 2.2m statue of a Rastafari priest is about to take centre stage at Judah Square in Concordia. A giant nautilus sculpted from stainless steel and indigenous wood will grace the SANParks waterfront on Thesen Island, contemporary steel and mosaic impressions of indigenous Knysna fynbos and Brenton Blue butterfly will be mounted at viewpoints in Belvidere and Brenton on Sea respectively, and in Sedgefield a full-size, fully-mosaiced classic VW beetle will be parked alongside the estuary as the latest addition to the town’s celebrated Mosaic Route. Knysna’s central business district will be cheered with the 70+ Knysna in Bloom flowerpots being turned into creative canvases for contributing artists.